Background of submissive and dominant behavior

Submissive and dominant behavior tell a lot about the person. In professional life is the hierarchy inside one group necessary for an effective and productive work. The management personal is almost dominant because the working with the human resources need dominant characteristic of the person. To be a good worker in the middle position inside the company hierarchy need at same time to be dominant and submissive.

This behavior has the roots in the evolution of human race because to be smart was not enough an far history, it was needed to be dominant and to lead the group to successful hunting and areas with food. Almost man is dominant in a mixed group and the woman is submissive. It not mean that a woman can’t be dominant, but  is more rare. In a family organisation is the situation same, the woman is submissive and organize the family events, food, child education and family care, the man organize the incoming money and the material status of the family. This was the standard organisation of one western family.

At the changing of time and social rules, more woman try to be independent and in new condition of social relationships is harder to be successful in a male dominated company organisations and management. Often must the woman show more competence and knowledge to be successful that a man. In good and effective group leading, the woman have some advantages that a man. The reason for this is in the way of orientation, because the mans are almost task oriented, like in army, but woman is better in person oriented jobs (education and health care). Companies today need both of this characteristics for a good leadership, and the woman have a big advantage.

Often is submissive and dominant behaviors misunderstood accepted, and can serious poisoning relationships, on last end to destroy it. Almost mans are the dominant persons in a relationship, but the misused dominance can lead the relationship to break. Often mans think that a woman “need to be leaded” and this oldies role game go to extreme possession. The best way for prevention of the escalation is the talking about the problems, wishes and statements. For mans is this a bit hard, because are almost not subject orientated as the woman.

To known who is dominant and how is submissive is often simple, but we don’t see it. In this role game are the signs good to see. The next picture explain one of them in the game of submissive and dominant behavior by a man. 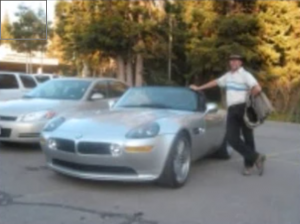 On this picture is to see how the man show his dominance and status by relying to a car and standing on one feat. The message is “i am powerful, i have this”. If one other person will do the same with his car, his reaction will be anger because somebody else try to dominate his object. By woman is this behavior of domination over one object not so often to see.

Body position can be presented a person as a submissive and dominant behavior. On the next picture is showed this by woman: 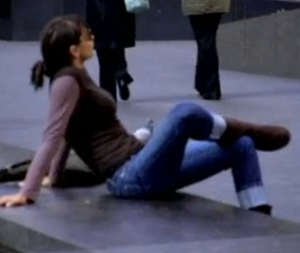 As You can see, the woman body posture is open and she is in public. She don’t show any sign of fear or distress, she fill powerful, self confident and secure. Shes upper body and the genital area is exposed what by woman is often a sign of dominance. This position in public is presented often by mans, to show his dominance with courage and fearless body posture. The meaning of this position is “I so strong, You are not a danger for me, because i am powerful!”.

The opposite side by body posture is presented on next picture: 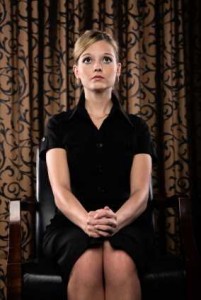 This picture present the typical submissive body position. The person look up, she is down and the source of this emotion or the subject or object from which she depend is upper she. The neck is exposed arms are close to the body and the hands closed in a position like by prayers in church. Legs are closed and strong pushed against each other. The clothing in black and in only one color. The person is in low attitude, a typical submissive behavior.

A good example of the neutral or equal position by sit is on next picture. 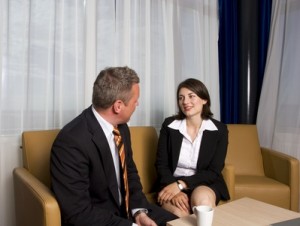 Shes hands are relaxed, the legs are not pushed strong against each other, the clothing is different from the picture before.

Handshaking and the submissive and dominant behavior game

Another sign about submissive and dominant behavior is the hand shaking. There are 3 major type of handshaking what describe the dominance: 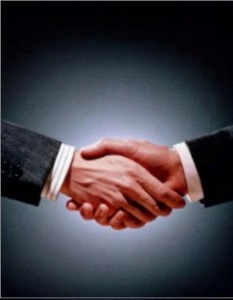 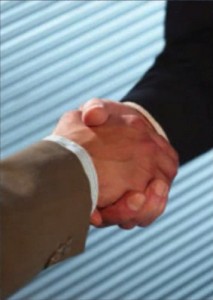 On this picture is to see both submissive and dominant behavior by handshake. The hands are not vertical, like on the image before. The person whose palm looking to down (with brown jacket) is dominant and person whose palm looking to up (black jacket) is the submissive. Showing the palm mean that have nothing to hide, is not dangerous. The lowering of palm by handshake is the sign to presenting power and dominance over the other person, who have to show his palm to up. 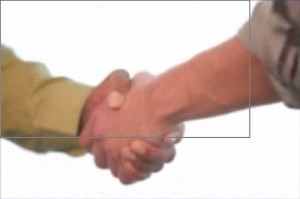 On the upper picture is to see the controlling handshake. Looks similar to the equal handshake, but the difference is in thumb. The thumb grip the rest of hand.

Another sign of dominance is the position or arms on the body. 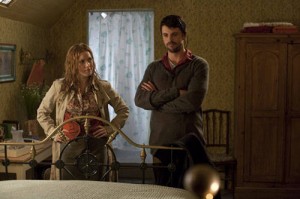 The woman hold shes hands on shes pelvis. The posture is open, looking slightly to the man. The mans head is lowered, his hands are crossed to depend his upper body. He don’t look to the woman side. On this picture can You see both submissive and dominant behavior. A submissive is presented by man and the dominant by women.

On next picture is presented the authoritative body posture. 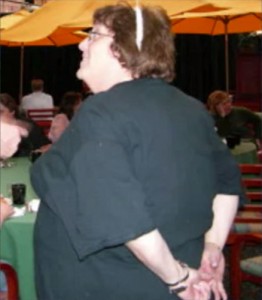 This body posture is often presented by army personal with higher rank. The posture is open, hands are behind the person so the front is open. This mean that a person don’t think about defending. Only the finger is hold by other hand, not the arm. Is the person hold the arm with other hand, the meaning is different in oppose way, the person are not sure. This position is presented by persons who are dominant, but not the dominance is used but the authority. Often presented by middle age or older personal that had worked with human resources.

The question who have submissive and dominant behavior is important in todays life, almost in working with human resources. Understanding this game will provide You an advantage in relationships.